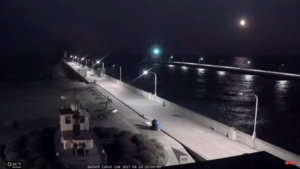 I was looking at https://www.youtube.com/watch?v=9k_sg8rhsgk which is on the roof of the Lake Superior Maritime Visitor Center in Duluth, Minnesota at about 11:30 pm.  The moon was shining brightly on the water.

From Google maps I found the satellite view, a rough idea of where the camera was pointing, and the latitude and longitude in decimal degrees.

I found “MoonCalc” at MoonCalc.Org and set the location (left side about 2/3rd “set lat/lon”) and used the slider at the top to see the time.  It gave me this URL to improve things later.  I see the decimal lat long, the date and time.  Not sure about “/1/3”.

It looks like the camera is pointing north of east, from the satellite view. I clipped the satellite image and put it in Paint. The center of the daytime image is near the end of the pier to the left of the light house.  It is tedious to match the camera image with the satellite view. Different times and shadows.  I think someone moved the trash can.  There is a white box on the roof. I think that is the camera.

I extended a line horizontally from the camera box (write the number down!) and then one vertically there to the end of the pier where I think the center goes.  That is arctan(126/1063) = 6.77 degree north of east. 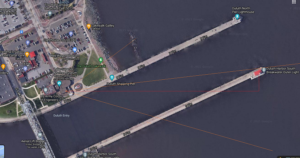 I think all cameras should have their camera, its parameters, location and direction published – if they are a public site.  If it is on the Internet it is public.

I am trying to calculate the direction of a live webcam from clues in the image, including where the moon is showing. I used your MooncCalc in my draft.

Here is the link to my notes:  Estimate Direction of a live webcam from position of the moon at known time at
/?p=2251

Have you ever tried this problem of identifying the location of a camera (telescope or any camera) from the position of moon, sun, planets, stars in the image?

Here is where I used Astrometry.net with stars to find information about another live webcam.
Calibrating and documenting all images and videos on the Internet – Half Sky and All Sky Cameras at /?p=2239