Richard K Collins Collaborative Model and Data, Experimenting, For profit groups using the Internet, Schools, Universities, Learning and Working September 12, 2021
Hello,
I was looking at all groups working on games on GitHub and came across this particle clicker game.
http://particle-clicker.web.cern.ch and https://github.com/particle-clicker/particle-clicker
“An addictive incremental game that teaches players the history of high energy particle physics”
So you click, it pulls up a random diagram of a scattering event, with no associated data.  Shows it for too short a time to look at it closely.  Has no labels or explanations?  And this is a science game?
Trying some of the clicks, it seems rather cynical – “If you have money and people, you can get fame at CERN.  Spend more, get more.”
I really do not understand why four people would make this.  Good graphics, clean operation, not very flexible, no context, not a bad simulation of a research group with these kinds of constraints.  Good practice for you, but not for the players.
In a real “game” of particles, if the people actually look at the data, they learn and discover new things – often outside the range of a closed group with limited prospects.
Personally, I would like to see real data in a table that I can work with.  Real numbers, real units, real labels and trace information.  If this is purely simulated, it is a triple game – a game of reality of the particles, a game of reality of the project, a game of the reality of the use of the time.
ALL your displays are too fast for new users.  Each time you do something new, you have to point it out, and explain it.
This is not a teaching game because you are not teaching, you are playing with making a model of organizational behavior, and a model of someone looking at data.  It needs a lot more work and care to be a teaching game.
The people and the data streams are independent in the real world.  Only in the artificial CERN organization are resources tied to fame and connections.  If all the data is shared with everyone, you get the highest probability of “someone” gaining sufficient knowledge and experience with the data to make new discoveries and create new technologies – for the world, not for just a few ten thousand who can afford to play the CERN game.
Just go to the databases and get real data, share that with “Particle Clicker” players.  Tell them what the data is about.  Don’t play organizational games – giving more worth to people based on what they did in the past.
Good people wasting vast amounts of time because they are not focused on the true purpose of the organizations involved.  It is for the human species, not individual fame.
Richard Collins, Director, The Internet Foundation
Particle Clicker Group,
I played your game for a few hours, and it seems to have run out of any new things it can do.
It follows a trivial path of (1) buy the cheapest people who produce the most data, (2) buy any upgrades that doubles data per person, (3) buy the cheapest reputation per data rate. (4) buy reputation until any new discovery pops up and always buy the new discovery (5) always buy the new type of person offered as soon as it pops up and then only buy that kind of person.
I made a long video with comments and suggestions, but if you aren’t going to watch 90 minutes of me going over all the various ways this could be improved, and CERN could be improved, it would not be worth uploading.
In the real world, you don’t have to pay people to collaborate, you just have to know what they are doing and why.  And you have to share data and problems that interest them.  All the pieces of the model in the game are unrealistic.
Richard Collins, Director, The Internet Foundation 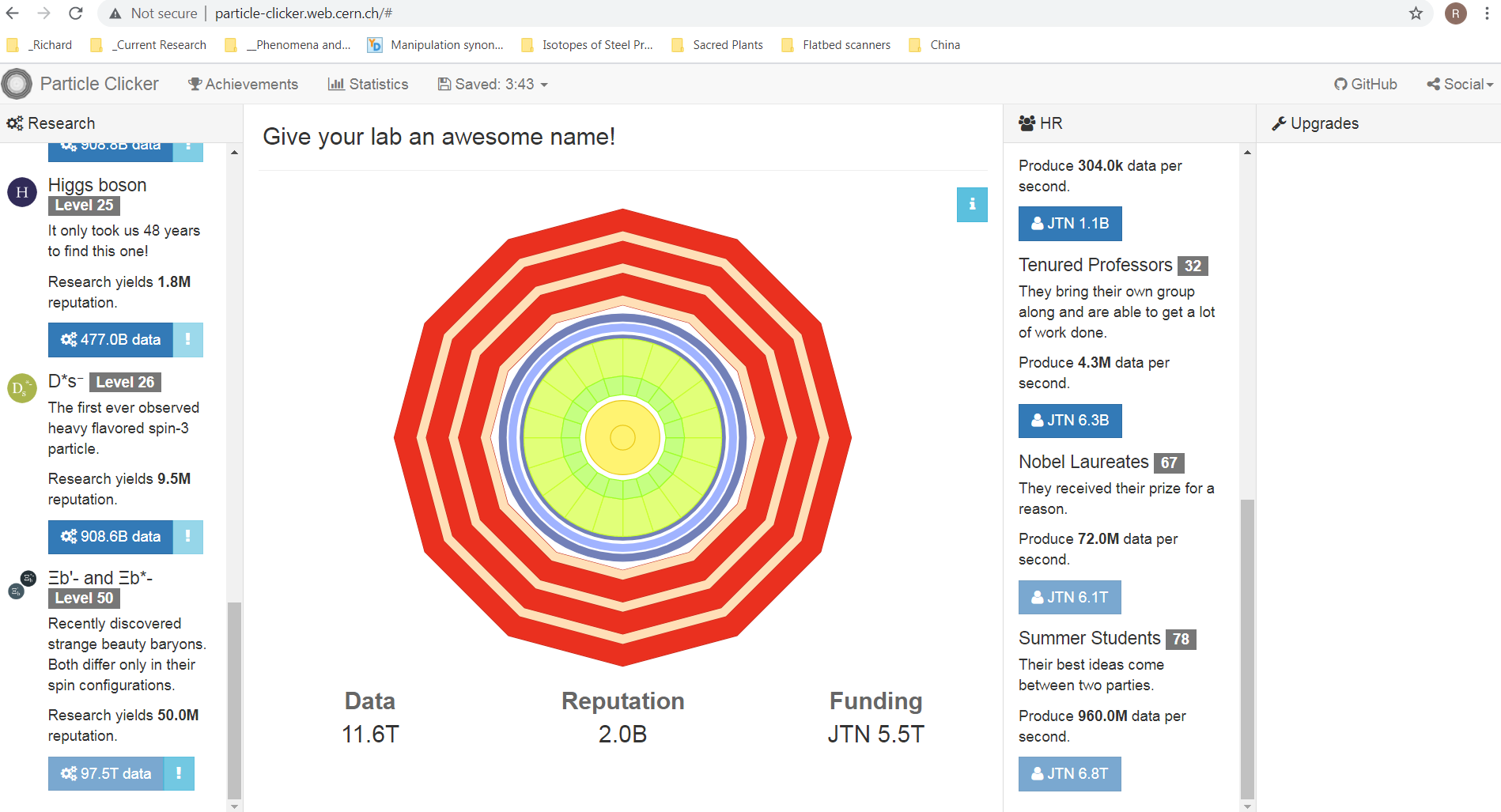